The purpose of the test was to exceed FINABEL Agreement No. A.20.A 100km with all four tyres deflated with Runflat CBR runflat inserts fitted to normal single piece drop-centre wheels.

1. Number of tyres deflated during trial:

Trials were carried out with all four tyres deflated. Finabel requires either one or two deflated tyres.

On road tests were carried out at an average speed approximately 60% higher than those specified in Finabel, i.e. where Finabel may specify 30kph the tests would be carried out at 30mph.

The road and off-road trials will be carried out separately with two different sets of
perforated tyres.

2.3.2. The vehicle having one or two tyres penetrated must either:

a) cover a course of a total distance of 100 km without the tyre dismounting from the wheel or starting to catch fire and with no serious effect on steering, manoeuvrability, stability, braking and maintenance of speed under the following conditions:

b) travel off road for 2 hours at a speed of approximately 30 km/hr without the tyre leaving the wheel rim or starting to catch fire. 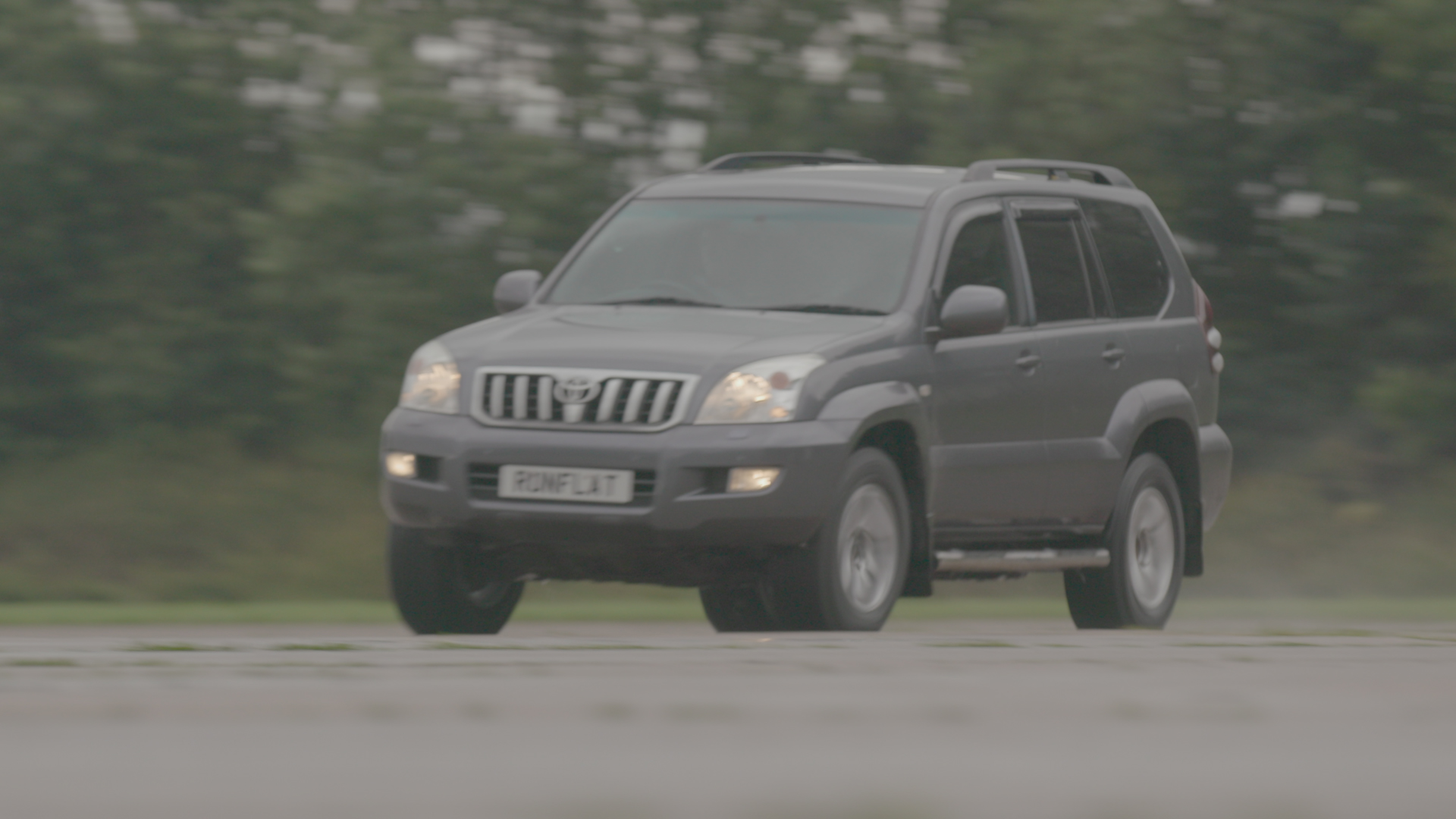 Before the test each tyre was marked to show its position on the wheel. This was to measure any movement of the tyre on the wheel rim.

The vehicle was fitted with a remote camera under the bodywork in front of the offside front tyre. 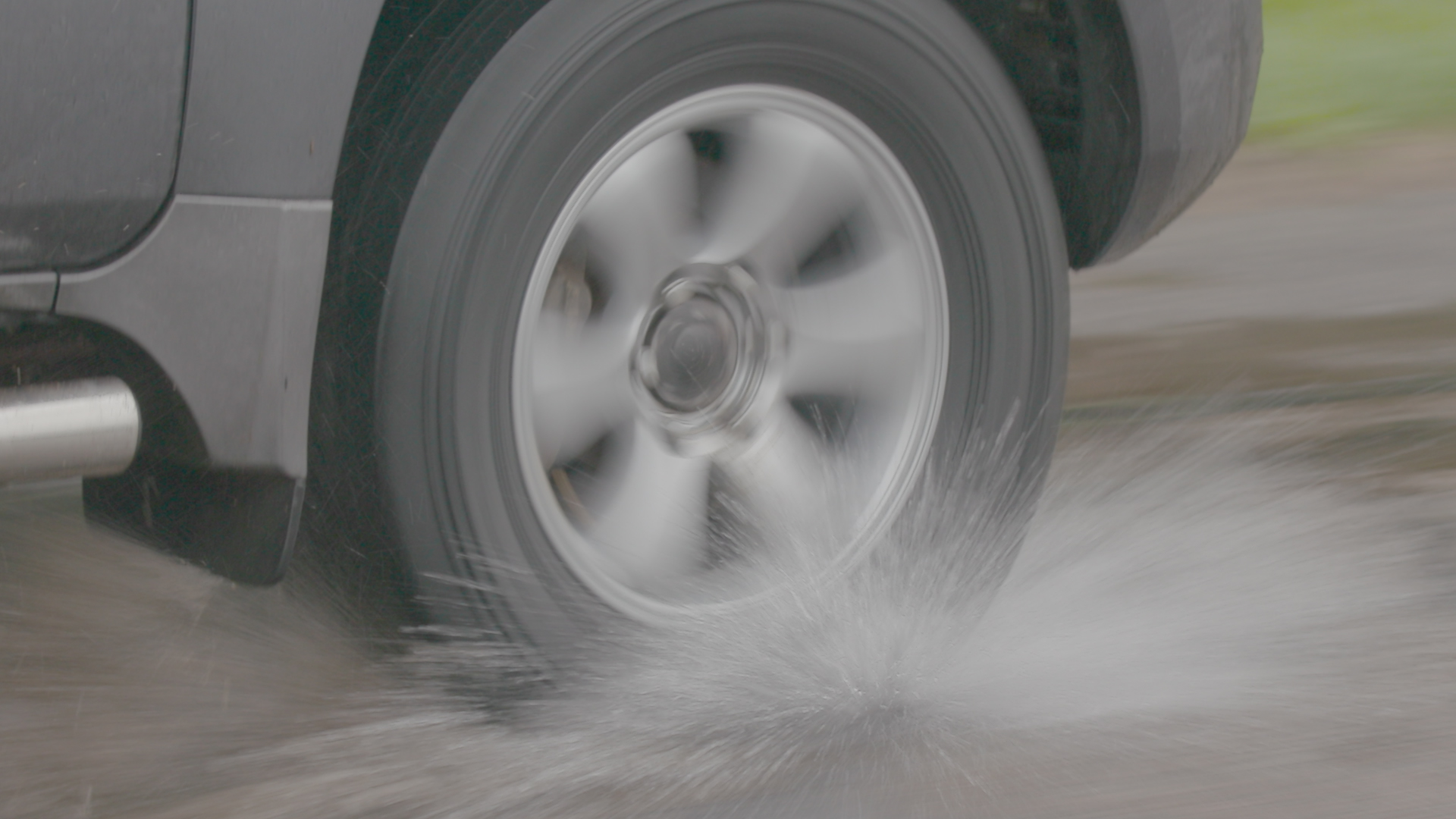 A film crew from Threeguru Ltd was present, with two camera crews to witness and film the event. A third camera was fitted to the vehicle.

c) Tyre temperature taken at start of trial was 16°C

d) No movement was apparent between the tyres and the wheels. On completion of the trial the marked points on the tyres had not moved in relation to the wheels.

e) At the conclusion of this test the tyres appeared ‘as new’, with no signs of distress.

f) Average tyre temperature at completion of trials was 18°C

Tested at IDIADA, Tarragona, Spain, in February 2018. Distance recorded 251.19km. Tests were concluded at the expiry of track time, with runflats still operational (tyres were re-inflated following each trial)

Further performance trials are to be carried out by MIRA and military vehicle OEMs throughout 2018.

These results will be published once completed.

a) The vehicle continued to the tarmac test running on the same tyres and runflats used on the off-road test.

b) Tyre temperature was recorded at 16°C

c) The vehicle was driven on the long straight of the tarmac circuit at Bruntingthorpe Proving Ground. With all tyres deflated the vehicle was accelerated to 70mph (112kph) and completed 1.9 miles (3km) at 70 mph (112kph).

g) No movement was apparent between the tyres and the wheels. The marked points on the tyres had not changed in relation to the wheels.

h) The tyres appeared ‘as new’, with no signs of distress.

i) Tyre temperatures were recorded at the end of the trials and averaged 25°C.

j) All tyres were able to be re-inflated after completion of both the on and off-road tests.

1. The trials demonstrated that Runflat CBR was capable of exceeding Finabel A.20A 150km by running at a 60% higher speed than specified and with all 4 tyres deflated on a fully laden 4×4 vehicle using standard single piece drop-centre wheels.

2. All-tyres-deflated performance exceeded the Finabel requirement of one or two tyres deflated.

3. Total distance covered over both components of the trials was approximately 200.4km (125.25 miles).

5. With all tyres deflated the driver was easily able to maintain full control of the vehicle during both the on and off-road components of the trial at all speeds.

6. No circumferential movement was recorded between the tyres and wheels.

7. Tyre temperatures remained acceptable during all stages of the trials.

8. No distress was measurable on any of the tyres following the trials. Tyres were re-inflated to be used again on following trials.

The wheel, tyre and runflat assembly was stripped down for an internal inspection.

1. Runflat CBR showed slight signs of wear, however this was minimal.
2. The runflat had not moved on the wheel.
3. The tyre showed no signs of internal distress.
4. It was clear Runflat CBR could have continued to function over more kilometres. 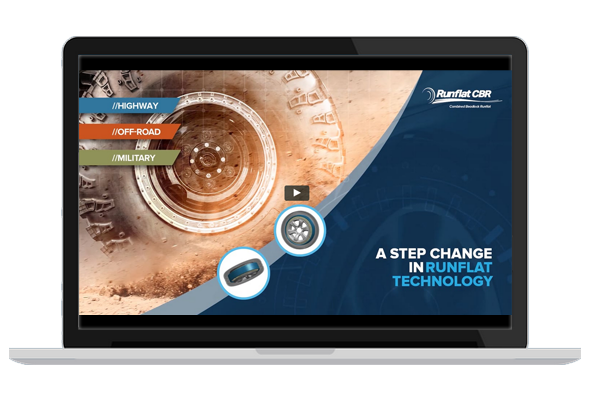